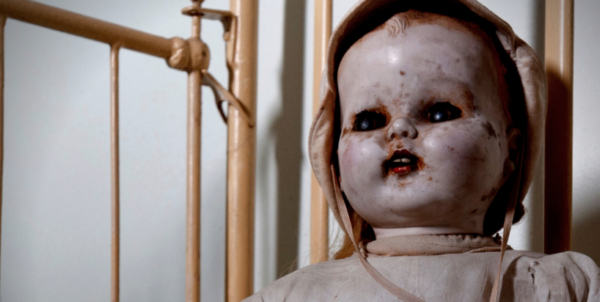 Click! The lock sprung open and the door swung in. Chunks of porcelain dolls—pieces of limbs, faces, torsos—were strewn across the floor.

Trudy startled at the crash—the sound of porcelain meeting tile—and sliced her finger instead of the onion she’d been preparing. Her nieces screamed from two rooms away.

I forgot to lock the office door. Trudy wasn’t used to children in her home. Fuck, fuck, fuck. She ran, oblivious to the blood running down her hand and onto her sleeve.

“Girls!” They had not only closed the office door behind them, but locked it as well. “Addie! Carrie! Let me in right now!” They had been silent since their initial screams, and the likely reason why chilled Trudy to her core.

They didn’t know what she really did for a living. They saw a case of dolls and wanted to play with them. How could they know the danger enclosed behind that glass?

Trudy fumbled with the doorknob before remembering the pin on the top of the door frame. A soft scraping sound came from inside the room. Please don’t let me be too late. She jiggled it into the lock, her shaking hands costing her precious seconds.

Click! The lock sprung open and the door swung in. Chunks of porcelain dolls—pieces of limbs, faces, torsos—were strewn across the floor.

Some pieces were bloody where they had cut into the girls. The two girls knelt by the destroyed display case, bleeding from lacerations all over their bodies. Addie’s eyes were rolled back into her head, her sightless gaze seemingly fixed on the ceiling. Carrie started straight at Trudy, with her skin pale as death and a blank expression.

It was too late. Trudy felt engulfed in defeat, her body suddenly drained of all energy. The entities trapped in those dolls hadn’t needed much blood to possess the girls, but they were sadistic and greedy and had sliced the children’s arms to ribbons.

Standing up was becoming difficult. Carrie’s mouth twisted into a wicked grin as Trudy began to slump to the ground. As she put her arm out to brace the fall, Trudy finally noticed her bloody hand.

They didn’t need much blood to possess her. The small-but-deep slice in her index finger provided more than enough.

It was good to be out of the porcelain prisons. There were still two who needed to find hosts, but now that they were free to hunt again, it wouldn’t be difficult. The girls’ parents were due later that evening, and Trudy’s body headed to the kitchen to grab a knife in preparation.